Minutes for the GHPA AGM on Mon Oct 19 2020 are now posted under the Community tab.

On August 21st in North America,. we have the opportunity to view a total eclipse of the sun. During a total eclipse, the moon completely blocks the sun, and the only thing visible from the sun is it’s tenuous atmosphere called the corona. The photo below shows the corona and was provided by NASA with credit to S. Habbal, M. Druckmüller and P. Aniol – Total eclipse image taken Mar. 20, 2015 at Svalbard, Norway. 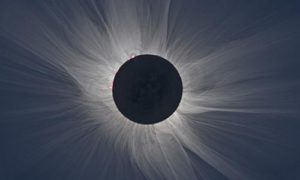 Total eclipses occur when the moon passes between the sun and the earth and may be a very rare occurrence in the universe. The apparent angular diameter of the moon and sun are both about 1/2 degree (about half the width of your pinky finger held at arms length) and this is because of the happy coincidence that the sun is 400 times the size of the moon, but is also about 400 times farther away!

You might think “wait a minute – doesn’t the moon pass between the sun and the earth on a regular basis, like every month?”. True but the moon’s orbit is inclined about 5 degrees to the that of the earth, so sometimes the moon is just a little to high, and other times a little too low for a total eclipse. The image below is courtesy of NASA. 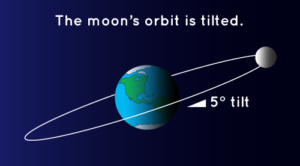 Not everyone on earth gets to see a total eclipse, as the moons shadow is very small. In general a total eclipse is seen somewhere on the earth every year and a half, while a partial eclipse (where the moon doesn’t completely block the sun occurs) is seen about twice a year. The path of totality is where the umbra – the darkest part of the moons shadow hits the earth, while the partial eclipses are seen in the penumbra as shown in the illustration below from NASA.

Sadly for Canada, we will only see a partial eclipse. The diagram below from NASA shows the path of totality on Aug 21st 2017 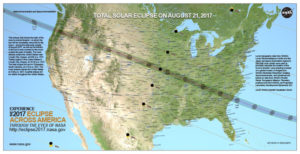 In the Northern Bruce we will see a partial eclipse beginning at 1:06pm, with maximum at 2:27pm and ending at 3:45pm. NOTE: DO not look directly at the sun during the eclipse, it will cause permanent blindness. There are astronomy clubs providing solar viewing glasses, and projection techniques can be used to safely view the eclipse. The following site from NASA has techniques on how to view the eclipse safely.